When some douche stubbornly refused to put out his cigarette while pumping gas, one employee of the station went to extreme lengths to show him that it is not cool to smoke so close to the gas pump.

The footage shot at Russia’s Gazprom gas station somewhere in Sofia, Bulgaria, shows the man driving up to the pump and getting out of the vehicle. In a true CCTV fashion, the footage is blurry, but the one thing that can clearly be noticed is that the man seems to be arguing with someone off camera. Then comes one of the station’s employees, grabs a big <a href="https://rumble.com/v31tc5-how-to-use-fire-extinguisher.html?mref=6zof&mrefc=6" target="_blank">fire extinguisher</a>, pops it open and sprays the man in the face with it. What happened?

According to a post on Reddit with an accompanying GIF, the customer refused to put his cigarette out, even after he was asked to do so by the attendant. The employee decided to take matters into his own hands by grabbing the <a href="https://rumble.com/v31wkm-fire-extinguisher-prank-backfires.html?mref=6zof&mrefc=6" target="_blank">fire extinguisher</a> and spraying the man down. Nothing like a good show-and-tell to teach kids about things that can definitely go wrong!

The warnings against smoking next to gas stations should always be heeded. In 2013, a Georgia man faced charges of reckless conduct after the action of flicking a cigarette lighter close to his gas tank ignited a fire that “severely injured” his wife, according to authorities.


There are few things in this world more volatile than gasoline vapors. While vapors are well contained these days compared to say, the 1960's, the risk of blowing up a fuel pump still exists. Even the most dedicated nicotine aficionado can abstain for the ten minutes required to refuel a vehicle.

Guys, take this video as a lesson! Smoking at gas stations is dangerous and you shouldn't do it! Still, fires at gas stations have happened and there's nothing to gain from smoking while you fill your tank. Here is a smart idea, why not wait five minutes to finish filling your tank before sparking one up?

We all know that fuel and open flares make for a horrible blend. We've seen enough action films to realize that when fuel is included, everything necessary is a little start to set off a monstrous blast. Which is the reason smoking close gas pumps is an outstanding no-no. So why do it? This kind of things when you are not careful when you should have been can lead to a big disaster! So don’t be like this guy!

So it's reasonable that this employee at the gas station got all around miffed when a smoker declined to put out his cigar while pumping gas. As video of the occurrence appears, it would appear that the orderly made the demand verbally, however, this brother just would not quit smoking. Nor would he, in any event, leave the gas tanks to complete his cigarette. Wow. Yes, he really did just put out that guy’s cigarette with a fire extinguisher! And let’s just say that the internet is loving this gas station vigilante!

Karma at its finest! 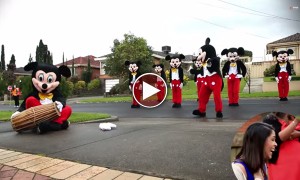 Lizard Rescued After Latching onto Car