The terrifying moment was captured when the cabin of a British Airways flight to Valencia today (August 5) was filled with smoke as panic spread throughout the plane.

Passengers on a British Airways flight faced a terrifying ordeal on Monday when their plane filled with smoke as the plane approached its destination, Valencia Manises Airport in Spain.

The flight, BA 422 from London's Heathrow Airport to Valencia, Spain, was descending on approach to Valencia, according to British Airways, when the cabin suddenly filled with smoke.

James, the filmer, detailed his terrifying experience: "I was on my first flight I have taken alone and we were coming in for landing.

Suddenly the cabin was engulfed in smoke and continued to fill. With no information or instructions we continued to land for another 10 minutes, passengers were handing out water, crying and covering their mouths with whatever possible as the oxygen masks did not drop down.

Once we had landed we continued to sit without information in the smoke until an alarm went off and a hissing sound was made.

Shortly after this we were told to ditch our belongings and jump off an inflatable slide.

I am currently sat in a terminal somewhere with little information and a bottle of water." 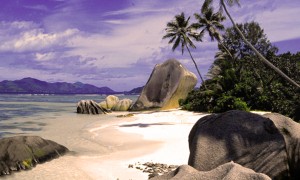 Truck Transports Motorcycle with Man On It