A storm chaser captured this dramatic moment of a tornado ripping through Minneola, Kansas.

Video captured on May 17 by an Australian storm chaser, Jason, shows a semi-truck on its side and the "shape-shifting" tornado barreling through the open fields of southwest Kansas.

"I'm an Australian storm chaser chasing tornadoes in America's Tornado Alley," Jason told Newsflare. "We managed to capture the birth of what would become a large and long-tracked shape-shifting tornado ravaging the open fields of SW Kansas. This tornado went on to destroy several buildings along the length of its path."

Jason added: "The initial development of the southern Kansas tornado was on the ground for well over an hour and travelled almost 50 miles. 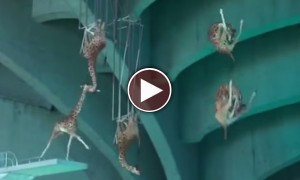