Info from Licensor: "This video was taken from the 7th deck, forward Explorer Lounge of the Viking Sky cruise ship at approximately 2 pm, local time. The location was just off the coast near Hustadvika, Norway. This area has a history of being a very dangerous section of coastline with many ships having been lost here. The Viking star was carrying just over 1300 passengers and crew when she lost power and was being blown towards the rocky shore by extreme wind and seas. These videos show the extreme conditions inside the ship as she rolled and pitched without power. Two anchors were dropped, the Captain called 'Mayday,' and helicopter evacuations were ordered immediately. At least one engine was restarted after a few minutes and two of the other engines were restarted throughout the night. About 450 passengers were successfully airlifted to shore before the ship was successfully towed to a nearby port by rescue tugboats." 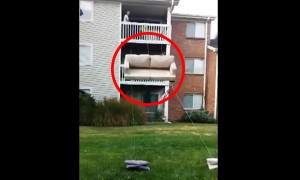